Wife of Senator Grey, Heiress to the Carlyle Fortune

Erica Mackenzie Carlyle Grey was born in New York City, to the rich if somewhat notorious Carlyle family, owners of an East Coast industrial cartel heavily invested in armaments and chemical manufacturing. Orphaned while still a child, the terms of her parents’ will gave leadership of the company to her younger brother, Roger Carlyle.

Roger proved to be a disaster as the head of the cartel. A notorious playboy, he was well on his way to ruining the firm when his tragic death in 1919 put Erica in charge at last. A resourceful (some would say ruthless) businesswoman, she rebuilt the family fortunes so well that Carlyle Industries has survived the Depression far better than its competitors.

She married her long-time fiance, the lawyer Bradley Grey, in 1926 and moved to California that year. 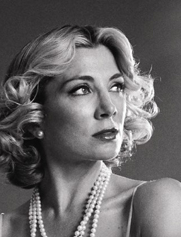